We are a hard-working, skilled group of construction professionals, dedicated to the satisfaction and success of our clients. We’re led by President and Founder Chad Griffin. Chad’s bio is available below.

Some parts of our new website are still under construction, including this page. More information about our entire staff will be added soon.

in the Pacific Northwest 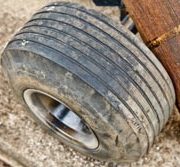 Chad has been building things his whole life. At just five years old, he built a working go kart out of his dad’s form boards (of course Dad didn’t know they were cut up until afterward).

Chad started his company while in his senior year of high school, beginning his contracting career performing foundation repairs. Those projects included everything from deck stabilizing on hills, to glass home lifts and stabilizing, to 20 foot deep drainage excavations.

Always eager to learn more about his chosen industry, Chad continues to expand his knowledge of engineering and building. This led to GFR joining the approved list of companies on the small works roster for WSDOT, Sound Transit and Port Of Seattle.

And on top of all that, if you ask nicely, he just might build you a sweet go kart out of form boards.

This page is under construction. Chris’s bio is coming soon.

This page is under construction. Greg’s bio is coming soon.

We are always looking for talented construction professionals with a passion for doing exceptional work. Are we describing you? Then apply today.